The cause of death section from my mom’s death certificate.

Today marks twelve years since that day. For much of that time I rarely ever spoke of my mother’s suicide. One small indication of this: the first posts on this blog were less than a year after her death but say nothing of it. In fact, I don’t think I ever mentioned Mom’s death on my blog save once very briefly in 2009, only to make a point about how infrequently I ever talked about it. (My sister also mentioned it in a comment.) I would often avoid mentioning it even in situations where it made perfect sense to share that part of my life with people. It just seemed too horrible. It was a symbol of the brokenness that was my life, and I preferred to bury it deep.

I’ve recently had a few unexpected conversations with a some dear old friends, which has put me in mind of the past. Somehow that led me to the realization that I’d never written a single poem about my mom’s suicide. Being the sort of person who uses poetry and other sorts of writing as a way of dealing with the tough stuff in life, it was an astounding realization. I knew I had to make this right, and figured it would be good for me to share it on my blog. And so I’ve written a poem about that horrible day when my mom killed herself.

This isn’t a happy poem. I’m not at the point yet where I can look back on this event without pain. There are still many loose ends inside of me, things I haven’t resolved, things I’ve never even expressed. But that’s exactly why I’m sharing this.

Not only is this poem not a happy one, but it’s also pretty negative toward my mom. My mother was a wonderful person, but she was emotionally very unstable and this was a source of pain for the whole family. Some of the specifics of this come out in the poem. But be sure to read the commentary following the poem to get some perspective.

I now present to you this long-overdue bitter retrospective poem concerning one of the most painful experiences of my life. 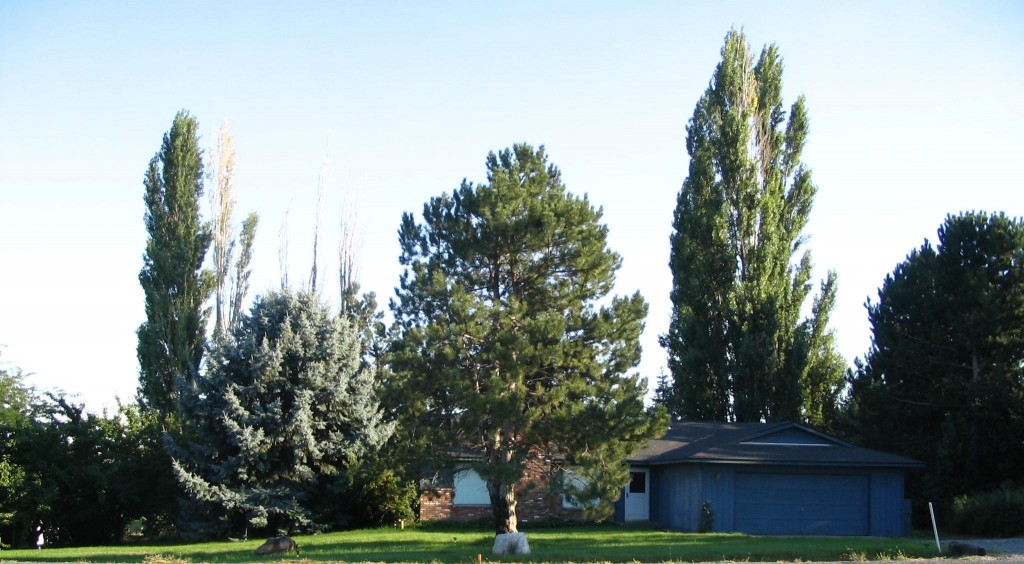 A Shot Rang Out

My mom—how can I sum her up?
I can’t. She was just
My mom—kind, gentle,
Needy, vindictive.
My mom—asleep all day in bed.
We learned early to fend for ourselves.

But that shot rang out in Kennewick
And now my mom was dead.
“Gunshot to the head.”

My mom—who’d come crying into my bedroom.
My mom—saying, “Fix me, child, I’m broken.”
My mom brought out the fake
And the hypocrite in me.

Like an earthquake
I felt my world tremble
When I heard.
I couldn’t breathe
And I breathed too much
At the same time.
In. Out. I’m crying. I’m okay.
In. Out. I’m different now.
Somehow everything has changed.

In. Out. Out. In.
Things never were the same
No matter how I tried
The day that shot rang out in Kennewick.
It was the day that my heart died. 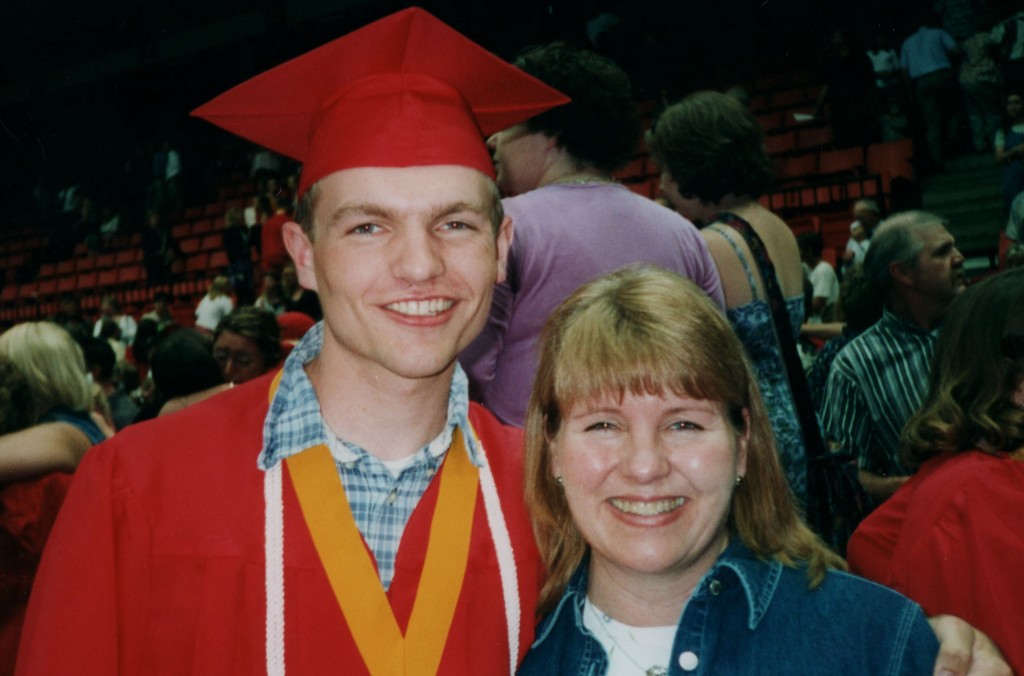 Me and Mom at my high school graduation.

And now a few comments about the poem.

“My mom—asleep all day in bed. / We learned early to fend for ourselves.” This poem takes a fairly cold tone towards my mom. I just don’t have the sort of rosy happy feelings about my mom that I think many people have towards their mothers. As kids many of the household responsibilities fell to us as Mom was “sick” in bed. She would lie there all day, the pretext being headaches, or chronic fatigue, or whatever. Maybe she was legitimately sick, maybe she was just escaping from emotional stresses she didn’t know how to manage, but either way, it really sucked for us. Sort of made it feel like she didn’t really care about us because she was just in her room all day in the dark and we had to take care of her rather than her taking care of us. But that’s just part of the reality of who she was. I think it was how she dealt with all the crap from her childhood. It was bad for everybody, but that was how it was.

“Needy, vindictive.” “‘Fix me, child, I’m broken.’ / My mom brought out the fake / And the hypocrite in me.” When I was a teenager my mom used me as a therapist. She would come into my bedroom when she was upset, cry, and then wait for me to say things that would make her feel better. Maybe that doesn’t sound so bad, but it was a powerful symbol of a totally backwards relationship. It made me feel deeply insecure to think that my mom was so unstable that she had to turn to me—her teenage son—for help. Who was I supposed to turn to when I ran into trouble? It got me into the habit of submerging my own needs since there just wasn’t room for them. It also made me into something of a fake because I would just tell her what I thought she wanted to hear so that she would feel better and leave me alone. It was awful. When I was a little bit older and told her I wouldn’t do that anymore, she acted as if I had betrayed her and, in truth, our relationship was never the same.

“Excusing what she did.” After Mom died, people would say how they felt she hadn’t really been in control of her actions. And, in fact, I actually feel like that is essentially true. Mom was horribly depressed. I don’t think she meant to hurt people, only to end her own misery, and I don’t believe she will be condemned by God on account of having taken her own life. However, from the perspective of a child, having your mom kill herself is unquestionably worse than if she had dropped you off at an orphanage. It’s total abandonment, completely final. Hearing people explain away Mom’s actions as not really being her fault was difficult to reconcile with the intense anger and pain I felt at being essentially abandoned by her.

“I was there for none of it.” I wasn’t present for the funeral or any of the usual mourning rituals as I was in Pennsylvania as a missionary. For me, this was clearly detrimental. It left me to deal with my grief largely on my own or with strangers, or at least people I hardly knew. It would have been better for me to have mourned in the presence of my family and the wider community at home. That said, I should mention here the many people who reached out to me through letters at that time. They were a source of great comfort, and I haven’t forgotten your kindness.

“It was the day that my heart died.” Mom’s suicide was probably the most impactful single event in my life and the lives of my family members. There were the years before, and the years after. It shattered my remaining illusions about the dysfunction in my family back then. Maybe, just maybe, I could have pretended before her death that things were in some ways normal, in some ways just fine. But once Mom killed herself, that possibility vanished completely. I had to admit to myself that, from the perspective of a mother’s responsibilities toward her children, our mother had largely failed us. I don’t think that was all her fault. She started out with some serious deficits herself. And yet it was true, and that hurt. 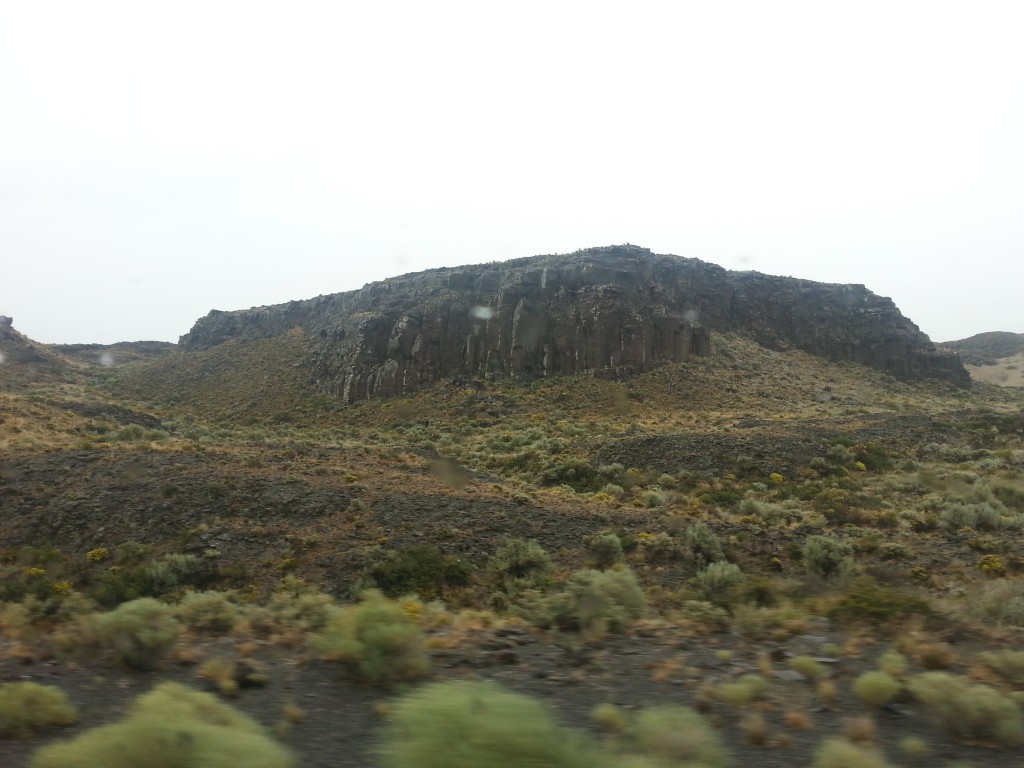 Part of the Saddle Mountains by the roadside on a rainy day, photographed during a scenic drive from the Tri-Cities to Seattle in 2013. So sad with the rain, and yet so beautiful.

I think one reason it took me so long to open up to people about Mom’s suicide is because I felt deeply ashamed of it. Kids (and maybe people generally) have a tendency to blame themselves for their unjust circumstances, e.g. “If Daddy beats me it must be because I’m bad.” You could call it the shame of tragedy. I think I felt like if I didn’t have a mother who was happy and safe and stable, then it must have been because I didn’t deserve one. Other kids were better somehow, so they got the moms who were happy enough and who would live past their forties. It’s totally irrational kid logic, but growing up like I did, that sort of flawed reasoning—and the deep-seated sense of inferiority, injustice, and anger that accompanied it—became a fundamental part of my worldview. I believe I still carry around some of that sense of shame about the things I’ve experienced.

I hope nobody feels I’m trying to tear down my mom’s memory here, nor am I trying to blame all my problems on my mom. I still really believe Mom was a good person basically doing the best she could. It’s just also true that she was a really hard sort of person to have as a mother. Reconciling those two realities about her is the essential conflict and paradox of my mother.

This post has been at least partly about shining more light on one of the darkest periods of my life. Let it also be about remembering Mom. Her life was a painful struggle and in the end her challenges were too much for her. She fought the darkness all her life, and finally she could fight it no more. But she did fight it for many years.

I believe she did the best she could, and I honor her for her struggle.